Little Bean's favorite things to play with have always been her stuffed animals.  And she has a ton.  Thanks, in part, to my love of stuffed animals as a child that my mother held on to for me.  She loves barbies too and just HAD to have a barbie house from Santa for Christmas.  But, most often I catch her playing with her stuffed animals...feeding them lunch, tucking them into bed, etc. 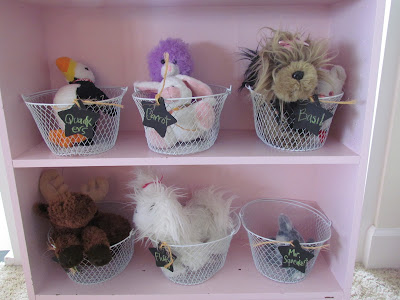 So, when a friend of mine pinned THIS on Pinterest, I knew that I had to come up with my own version of a play at home vet clinic for her.  It cost me about $10 total.

I picked up these cute wire baskets at the dollar store as well as the clipboard (below).  And then I went to Hobby Lobby in search of some dry erase labels for the basket.  I didn't find any, but I am glad since I saw packages of wooden stars instead ($1.50/4 stars).  Once I got them home, I drilled holes in them and then painted them with leftover chalkboard paint that I had on hand.  Then I just used some twine that I already had to tie them to the baskets. 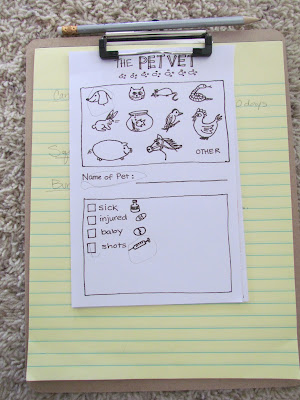 Now she can't exactly write or read a lot yet, but I knew we needed to have some sort of "chart" for the animals.  I found the printable HERE.  She enjoys using these, but she likes it more when I can document detailed notes for her.

She was telling me that she needed band-aids for her animals today.  Her doctor kit came with a bunch of sticker band-aids, but those all got used up during one play date.  So, I searched for a tutorial to make some.  I was shocked that I couldn't find one.  I did find some for sale on etsy for $16, but that is a little steep for this.  So, I winged it.  And it's crazy easy to do.  Even once I started taking pictures to do a tutorial, it only took a matter of minutes.

I used supplies that I already had on hand.  You only need some brown felt (or whatever colors/patterns you desire), some white felt, and some Velcro along with basic sewing supplies (scissors, thread, machine). 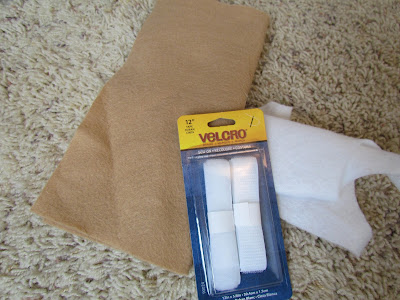 First, start with the Velcro.  You will only need to use the scratchy side.  So, yes, you will be stuck with unmatching Velcro pieces...annoying, yes.  Just cut it into whatever size lengths you would like...ours are between 2 and 3 inches.  Then round out the corners so they are shaped like band-aids. 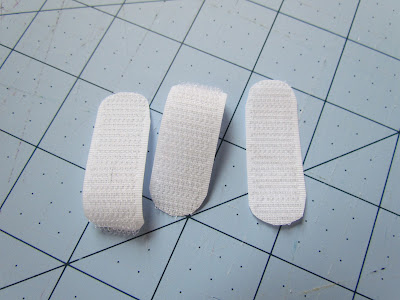 After I had all these cut out, I just placed them on the felt and sewed them on, one at a time without cutting the felt.  Like this... 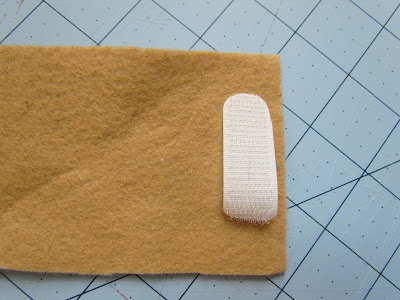 After this was done, I just trimmed around the edge.  I left a bit of an overhang (of the brown felt).
﻿ 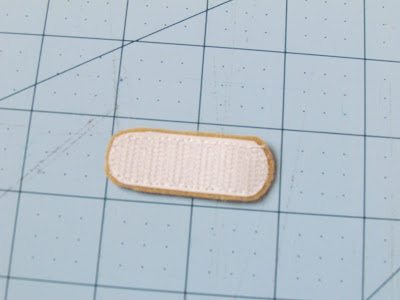 Now cut a small rectangle of white felt to stick in the middle to be the absorptive pad of the band-aid. 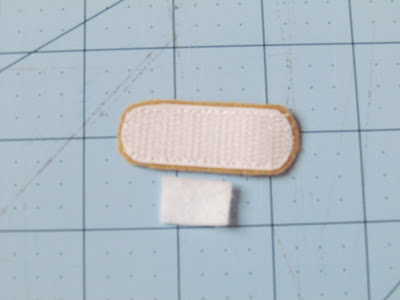 Voila!  That's it.  Now repeat.  And watch your child enjoy fixing all of her creatures. 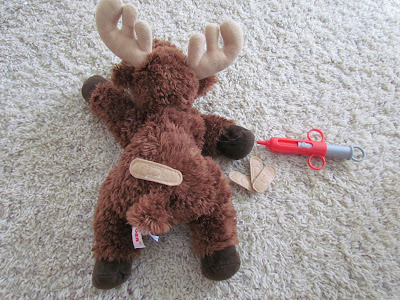 Something tells me that Moosy has had better days.﻿ 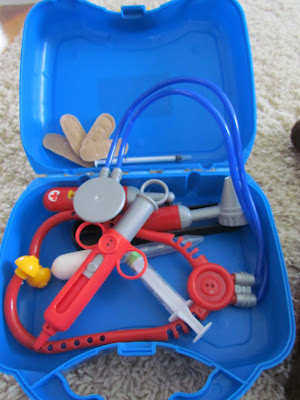 This is her doctors bag.  It's mainly just the store bought kit with lots of extra syringes (minus the needles).  The girl loves giving shots...in the neck.  Weird? 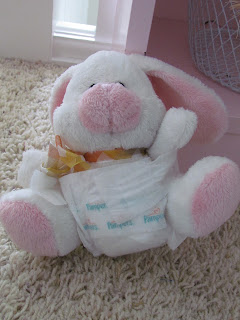 We even have diapers for the tiniest of guests (courtesy of a friend who works in our local NICU).  Apparently, if diapers get dropped, they get tossed in the NICU.  Works for us!
Unfortunately, my little bean was being crazy camera shy today (which is very out of character).  So, no cute little vet pictures today.﻿
﻿
Posted by Little Bean at 12:09 PM

Little Bean
My name is Amy. I love black. I love white. I love coffee. I love organization. I love polka dots. I love being a mom. I love my husband. I love decorating (cakes, homes, you name it). I love to sew. I love to paint. I love damask prints. I love my family. I love sleep. I love food. I love wine. I love baking. I love holidays. I love reading. I love the sun. I love ... (literally using the dot, dot, dot).